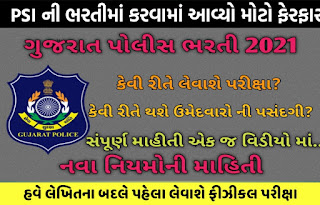 The Gujarat Police 2021 notification and all its application proceedings are expected within the end of the year 2021. The application fee is expected to be INR 100 for General and OBC Candidates and it has been waived off completely for all other categorical candidates. The vacancies in 2021 are expected to be from 11,000 from 12,000 and towards the filling of SI and Constable Posts.

1. Police are one of the most ubiquitous organisations of the society. The policemen,

therefore, happen to be the most visible representatives of the government. In an hour

of need, danger, crisis and difficulty, when a citizen does not know, what to do and

whom to approach, the police station and a policeman happen to be the most

appropriate and approachable unit and person for him. The police are expected to be

the most accessible, interactive and dynamic organisation of any society. Their roles, 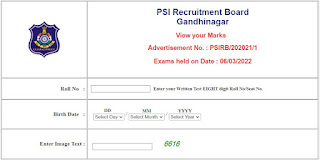 functions and duties in the society are natural to be varied, and multifarious on the one

hand; and complicated, knotty and complex on the other. Broadly speaking the twin

roles, which the police are expected to play in a society are maintenance of law and

maintenance of order. However, the ramifications of these two duties are numerous,

which result in making a large inventory of duties, functions, powers, roles and

responsibilities of the police organisation.

Role, Functions and Duties of the Police in General

2. The role and functions of the police in general are:

(a) to uphold and enforce the law impartially, and to protect life, liberty, property,

human rights, and dignity of the members of the public;

(b) to promote and preserve public order;

of communal harmony, militant activities and other situations affecting

installations and establishments etc. against acts of vandalism, violence or any

(e) to prevent crimes, and reduce the opportunities for the commission of crimes

cooperating with other relevant agencies in implementing due measures forprevention of crimes;

representative, in person or received by post, e-mail or other means, and take

prompt follow-up action thereon, after duly acknowledging the receipt of the

through such complaints or otherwise, duly supplying a copy of the First

Information Report to the complainant, and where appropriate, to apprehend

offenders, and extend requisite assistance in the prosecution of offenders;

(h) to create and maintain a feeling of security in the community, and as far as

(i) to provide, as first responders, all possible help to people in situations arising

out of natural or man-made disasters, and to provide active assistance to other

agencies in relief and rehabilitation measures;

(j) to aid individual, who are in danger of physical harm to their person or

property, and to provide necessary help and afford relief to people in distress

(k) to facilitate orderly movement of people and vehicles, and to control and

regulate traffic on roads and highways;

(l) to collect intelligence relating to matters affecting public peace, and all kind of

other matters relating to national security, and disseminate the same to all

concerned agencies, besides acting, as appropriate on it themselves.

(m) To take charge, as a police officer on duty, of all unclaimed property and take

(n) To train, motivate and ensure welfare of police personnel