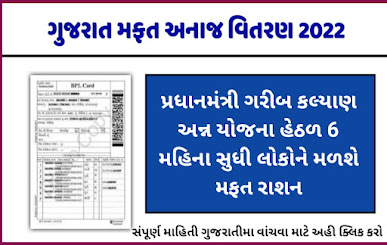 The central government announced this on Saturday.  Beneficiaries will now get free rations till September 2022 under this scheme.  Prime Minister Narendra Modi tweeted this information.  He said on his Twitter handle that India's power lies in the power of every citizen of the country.  To further strengthen this power, the government has decided to continue the Prime Minister's Poor Welfare Food Scheme for another six months till September 2022. 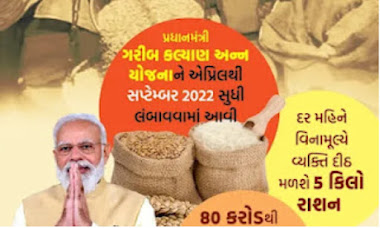 The scheme was initially launched for the period April-June 2020.  But then it was extended to November 30.  Under the Pradhan Mantri Garib Kalyan Anna Yojana, the government provides free rations to 80 crore ration card holders identified under the National Food Security Act (NFSA).
The free ration received under this scheme is more than the subsidized foodgrains given to the card holders by the ration shops.  Now the question arises as to who gets how much benefit under this scheme of Central Government. Let me tell you that under this scheme of Central Government about 80 crore ration card holders of India are given 5 kg more grain (wheat-rice) per member per month.  .  Let it be known that the citizen of the country who has a ration card is getting 5 kg extra ration every month along with his quota ration under this scheme.  Under this scheme, free food grains will be available at the same ration shop, where they are available on ration cards.
સંપૂર્ણ માહિતી ગુજરાતી વીડિયો દ્રારા જુઓ
Keep in mind that the benefit of free foodgrains under the Prime Minister's Poor Welfare Food Scheme is not for those who do not have a ration card.  The scheme is limited to ration card holders, numbering more than 80 crore in the country.
ગુજરાતીમાં માહિતી વાચવા માટે અહી ક્લિક કરો
Thus, the Prime Minister's free ration has been extended till September.  This will benefit more than 80 crore people.