Gujarat government has increased the dearness allowance by 3 percent

Gujarat government has increased the dearness allowance by 3 percent. From January 2022, there will be an increase of 3 percent and the amount of arrears will be paid in 3 installment. 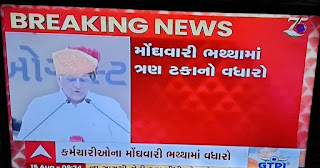 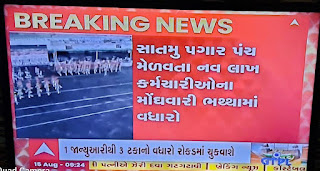 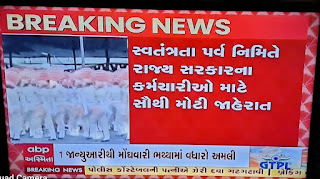 Addressing a function in Patan to celebrate Foundation Day of Gujarat, Chief Minister Bhupendra Patel on Sunday announced a three per cent hike in dearness allowance of 9.38 lakh state government employees, employees of the panchayat services and pensioners.
An official release stated that the hike in dearness allowance will be applicable from January 2022.
The Central Government had merged 50% of the Dearness Allowance (DA) with the basic pay w.e.f. 01.04.2004 and the Dearness Allowance continued to be calculated with reference to the AICPI (IW) average as on 1st January, 1996 of 306.33 without changing the index base consequent to the merger. Accordingly, Dearness Allowance (DA) at following rates were sanctioned from 01.07.2004 till 01.07.2007.
The Central Government on the recommendations of the Sixth Central Pay Commission had decided that the Dearness Allowance (DA) admissible to all categories of Central Government employees shall be at the following rate
વાંચો સંપૂર્ણ માહિતી અહીંથી