Heavy rain fall in Gujarat for the next 5 days

Heavy to very heavy rain may fall in Gujarat for the next 5 days. 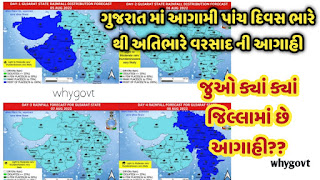 See the forecast made by the Meteorological Department.

Addressing a press conference in Gandhinagar, Revenue Minister Rajendra Trivedi said that CM Bhupendra Patel has asked all the administrations to remain alert. “For July 22 till 23 morning heavy rainfall is expected in 5 districts of Surat, Navsari, Valsad, Dang and Tapi but at isolated places. So residents need not worry. However, from July 23 8.30 am till July 24 8.30 am – red alert for Kutch, Mehsana, Sabarkantha, and Aravalli has been issued. All district administrations concerned have been alerted and are prepared,” Trivedi said, The Indian Express quoted.

According to the weather department, there was significant reduction in rainfall activities over Gujarat and west coast from Tuesday. So far, at least 70 people have lost their lives due to rains and rain-related incidents in Gujarat since July 7. The minister further added that over 50,000 people have been relocated to safer places and 1500 plus others have been rescued so far.