Now you don't have to pay extra toll tax on highways, know the benefits of GPS toll system

Now you don't have to pay extra toll tax on highways, know the benefits of GPS toll system. 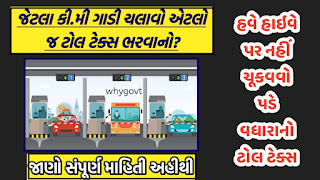 The National Highways Authority of India (NHAI) has introduced fresh guidelines under which toll operators have to ensure the service time per vehicle is not more than ten seconds. If a four-wheeler vehicle waits more than ten seconds at the toll booth, then they will be exempted from making the tax payment. The rule is applicable even during peak hours at toll plazas to ensure smooth passage of vehicles.
It is also  that the Ministry of Road Transport and Highways has asked toll plazas to mark a yellow line 100 metres before the booth entry. If under any situation vehicles are seen behind the yellow line, then the toll operator will have to let the cars ahead go without paying the tax. NHAI says that the new rules are to ensure that drivers do not face any hassle during toll plaza payments even during peak hours on the National Highways.
Considering how more drivers have moved to FASTag, social distancing has become the new norm under the pandemic and most of them prefer to make contactless payment. FASTag has already reduced the waiting time at toll plazas according to NHAI. With the new rule, if there is a queue of vehicles for more than 100 metres, the vehicles will be allowed to pass without paying toll tax.
However, the new rule is only to work for those making the payments by cash. For those who have made the switch to FASTag, the toll tax amount is automatically deducted as soon as their vehicle approaches the toll window. Hence, how would a FASTag user be exempted from the toll payment if they have waited for more than 10 seconds, remains unanswered.
જાણો સંપૂર્ણ માહિતી અહીથી