India has commissioned its first indigenously-built aircraft carrier, Vikrant, at a ceremony in the southern state of Kerala.took a tour of the vessel ahead of its induction into the Indian navy. 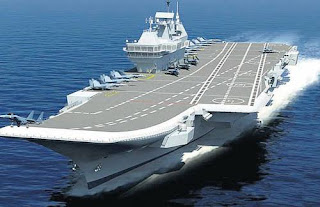 It is a moment that was 13 years in the making.

The vessel - 262m (860ft) long and almost 60m (197ft) tall - is the first aircraft carrier India has designed and built on its own. It has the capacity to hold 30 fighter planes and helicopters.

Mr Modi called the carrier "a floating city" and the "symbol of indigenous potential".

"With INS Vikrant, India has joined the list of countries which manufacture huge aircraft carriers with indigenous technology. It has filled the country with a new confidence," he said at the commissioning ceremony.

India's other aircraft carrier, INS Vikramaditya, can carry more than 30 aircraft. The UK Royal Navy's HMS Queen Elizabeth can carry about 40 and the US Navy's Nimitz class carriers can accommodate more than 60 aircraft.

Vikrant, which cost around 200bn rupees ($2.5bn; £2.1bn), was expected to be inducted into the navy by 2017. But the second phase of its construction was beset by delays.

But the ship's commissioning is still a historic moment for India, which will now join a select group of countries capable of building such a vessel. It's also a shot in the arm for Mr Modi's plans to boost domestic defence manufacturing.

The name Vikrant (which means courageous) is also special - it was what India's first aircraft carrier, bought from the UK and commissioned in 1961, was called. The first INS Vikrant was a major symbol of national pride and played an important role in several military operations - including the 1971 war with Pakistan - before being decommissioned in 1997.

After Friday's commissioning, the new Vikrant will sail across both Indian and international waters, accompanied by a fleet of frigates, destroyers and submarines to protect it.

At present, Vikrant is at the government-owned Cochin Shipyard in Kerala state - where the ship was built and where the commissioning ceremony was held.

Once it's in service, it will eventually be the workplace - and home - for 1,700 crew members.

Ahead of the ceremony, there were technicians everywhere - fixing cables, polishing the interiors and making sure everything was in shape for the commissioning.

Teeming with crew, journalists and visitors, the insides of the ship felt like an unending complex of noisy workshops