1000 rupee note will come into circulation

5 to 6 years ago, 1000 rupees and 500 rupees notes were stopped overnight and many people suffered a lot of loss. Even now a video is going viral in social media. In which it is being claimed that there is a plan to bring 1000 rupee notes back into the market from January 2023. 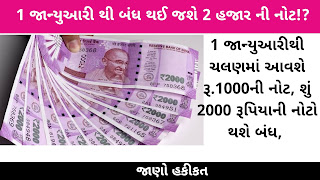 pib has tweeted and informed that this message is fake. pib has also appealed to people that do not forward this message as it is wrong, the 2 thousand note will not be closed. It is being written in the viral message that from January 1, 2023, one thousand rupees note is going to come into circulation and 2 thousand rupees note is going to be discontinued. You will be allowed to deposit only 50 thousand rupees and it will be allowed only for 10 days.
After that these notes will have no value so do not keep the 2000 notes with you, although PIB has considered this message as a complete waste. And asked not to pay attention to this message.
1000 rupee notes were taken out of circulation after demonetization by Modi government in the year 2016. The government did this only to curb black money. And this year the government introduced 2000 thousand and 500 notes in the market.
• આં માહિતી ગુજરાતી મા વાંચવા માટે – અહી ક્લિક કરો
Currently, the central government has said in reply to a question in the parliament that the printing of 2000 rupee notes has been stopped since 2018-19, no order has been given to print the notes.
Stay connected with www.gyanmahiti.com for latest updates