An idol of Hanumanji was found from the ground in Junagadh.

Many times idols and many pamphlets are found on the ground. God created this world. God is the creator of this creation. 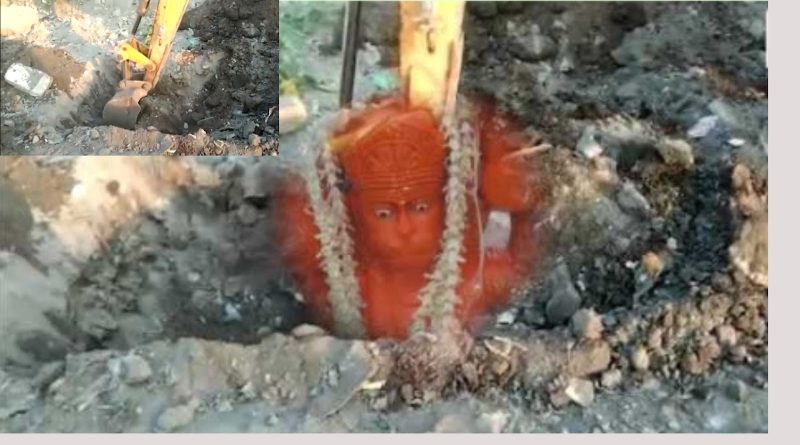 Ashvinbhai Dave, an old devotee of Hanumanji from Keshod, had been seeing Hanumanji in his dreams for a long time. According to devotees, Hanumanji appeared in a dream and informed that his idol was buried on the banks of Narasimha Sarovar. So devotee Ashvinbhai reached Junagadh. And late in the evening while digging, the statue of Hanumanji was found in the ground. Everyone was surprised to see this and rushed to see.
Ashwinbhai said that he was thinking of going to Junagadh for the last few days due to the dream he was having. Then he reached the shore of Narsingh Sarovar in the evening. After reaching there and talking to Atulbhai, a four and a half feet statue of Hanumanji with vermilion came out of the excavated ground with the help of JCB.
https://youtu.be/pPrS1Zfjyqs
વિડિઓ જોવા અહીં ક્લિક કરો
The statue was taken out and lifted by the hands of four or five people. The weight of which was found to be more than 100 kg. As Hanumanji’s turn was Saturday, Hanumanji spontaneously appeared from the ground in the evening.
• ગુજરાતી મા માહિતી વાંચવા માટે – અહી ક્લિક કરો
All prospective devotees of the statue of Hanumanji declared that Manifesto was Hanumanji. All the devotees performed Puja Aarti with the statue in four squares.
Stay connected with www.gyanmahiti.com for latest updates